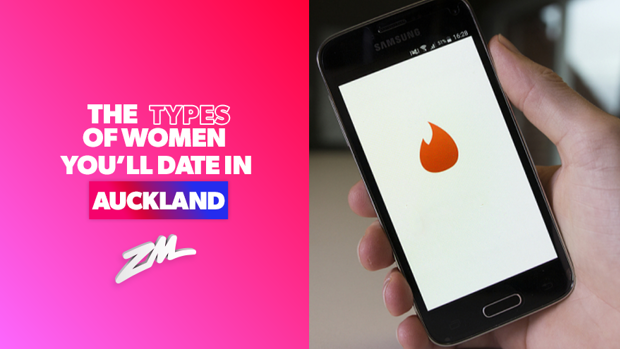 Dating in Auckland- like the rest of the country- comes with certain cliques of who you'll be dating.

We decided to break down the different types of Auckland chicks you may date- and even though we can't cover every girl, it's pretty likely you'll probably recognise a few.

The Coastie girl is literally a dude with a vagina. She's one of the boys. She can drive anything better than you, from a tractor to a tow-all. She'll take you out on Dad's boat but never let you drive.

Guaranteed to catch more fish than you, and much more comfy with a fish 'n chips on the beach kind of date than a fine dining situation, this sassy lass will wear a flat peak and a pair of Bonds for all situations.

This may sound awesome, up until the point when you realise that missionary is the height of her sexual progression and you'll never go beyond that.

If you fancy raising 2.5 kids in the back of Orewa, the Coastie babe is the one for you.

There, she'll order an Instagrammable açai bowl that she'll barely touch because she's terribly insecure about herself, so eating actual food in actual public is hard work. She's smart enough to know she shouldn't have these kinds of issues, but still wrestles with it.

She'll date you frivolously for four months and then suddenly panic because all her friends just got married and now she's realised that she needs to lock it in, so she'll dump you in favour of a bookish accountant that she's known since high school (I said the same thing about the Shore boys - they always end up marrying each other, you see).

And yes, for those asking: the consensus seems to suggest there's truth to the saying "Shore girl = sure thing." The Shore girl will most likely sleep with you first and ask questions later.

RELATED: Women Share Their Biggest Piece of Dating Advice They'll Give Their Daughters

Despite having what is arguably the "cushiest" life of any Auckland girl, this young lady suffers from a severe case of white privilege and has deep-seated issues around who she should and shouldn't have relationships with.

You'll find her wearing expensive activewear at almost any time of day on a weekend, and if you wait outside a Mecca Cosmetica, your chances of spotting a Central East babe in her natural habitat are almost guaranteed. She can't help spending a ludicrous amount of money on liquid foundation and highlighter, and pays three times as much for her highlights as anyone else even though they look just the same.

Should you somehow make it past the first couple of dates with a Central East babe, you'll find yourself housesitting her parents' place only a block away from her own pad. They will have a pop-up wine fridge in the middle of the counter, and a hot tub that is "out of action."

Her mother is a "hot mess" who papers over her neuroses with low-level alcoholism, and her daughter is destined to go the same way.

You'll run into her 18 months after she dumped you, at a fancy bar in the city when she's having an engagement party with her much older doctor fiancé. That's when you'll realise that almost everyone else she's ever dated was just a stepping stone on the journey to the person her parents wanted her to marry.

She's completely unaware that marrying the surgeon is not actually what she wants to do and doesn't see the divorce coming in four years' time.

You'll find a quirky bunch of girls in the Central West 'burbs, most of whom hail from the far corners of New Zealand. What brings them together is their flair for the creative arts and marketing.

Auckland's creative babes are in high concentrations around Ponsonby/Grey Lynn/Herne Bay and surrounds, and boy do they love a rosé.

When they're not working a million hours a day, you'll find them sipping an almond latte at Dizengoff with their designer toy dog, waiting until Superette opens for the first glimpse at the new C&M range.

They're on a strict schedule of Tinder/Bumble dates Monday through Thursday evening so they don't have to pay for dinners, work drinks on Friday, and Pocket Bar on a Sunday.

If you're lucky enough to find yourself in her bedroom, be sure to compliment her on her lamp. She will have spent an extraordinary amount of time finding the *right* lamp. If she can't afford a pricey one, it'll be a Kmart job, but she'll make the point that she doesn't normally shop at Kmart.

The Central West girl will leave her run for having babies way too late and end up either forking out a bazillion dollars on several rounds of IVF or will be childless for life.

It's best not to bring it up though because you'll never hear the end of it.

She's always claiming she's "off the booze" for a month, then a day or two later will post a "cheers" boomie on Instagram.

The Eastie babe almost exclusively shops for her homewares at Kmart. Her flat will be decked out top to bottom in "rose gold" knick-knacks with fake plants and little house-shaped shelves.

She's a lady-tradie of some description - a hairdresser, makeup artist, or beauty therapist - and definitely has a few regrettable tattoos, quite possibly a tramp stamp that was questionable even in 2010. LOVES an RTD, and will pre-load on a box of Long Whites before heading into town for a big night out at 1885 where they'll whinge loudly about the door charge after waiting an hour in line. An East gal always knows where to get a bag from and will do anything for a free pinger.

Despite her leanings toward the beauty industry, she'll have way over-processed hair that feels like hay, and remains deeply committed to the square french manicure.

She quite likely went to Thailand and came back with new boobs, possibly as a group deal with the rest of her squad (#goals). She'll show off the new assets in a too-tight $20 bandeau dress from Dotti, complemented by a deep orange glow from her fake tan, and topped off with some hectic contouring and brows that took 40 minutes alone.

God help you if you ever find yourself in her car - it'll be a Suzuki Swift that has never, ever been cleaned, covered in hair from her Rottie, and littered with Maccas wrappers (the Eastie loves a McNugget!).

She'll chew you up and spit you out, don't expect anything more.

RELATED: This dating app lets your friends choose your match

These wealthy farm girls are a real treat. You'll think everything is going great on the second date as you go in for the pash outside her house, but she can only hold her crazy in for a few weeks before the cracks start to show.

By date six you'll start to wonder what you're doing with your life. At this point, if you do end a relationship with a horsey gal, she'll pull the "I'm pregnant" card just to mess with your head.

She has zero filter and will say absurdly offensive things, followed by "jokes babe", even though she actually means it. She has a different bestie every week, and can't hold down a job, but that's okay because Daddy's got her back.

The Horsey babe is constantly sending Snaps of herself singing in her car. She also is known to put up an attention-seeking status on Facebook that's "not aimed at anyone" but totally is, followed by a "can my life get any worse" status the next day. Rather than saying what the problem is, she'll say "PM me" when asked.

A Karaka girl will also happily hook up with another girl's man even though she knows he's taken, and has been known to sleep her way to a promotion.

She's a ruthlessly good liar, knows how to play the victim, and is forever in denial about the carnage she causes. The Horsey girl has been kicked in the head a few too many times.

You could never accuse a Westie of being a gold digger because they literally don't care. These girls give zero f*cks. They'd much rather go for a guy with an epic car than a fat wallet. They'll be on the hunt for a surfer or some sporty macho guy, or a semi-famous tattooist.

She was massively indifferent at high school, wagging every other day and smoking dope out of a Cody's can on the field, and she'll have ended up with a couple of kids quite young. That doesn't matter though, the enterprising Westie will be growing a stash of weed in her crawl space that supplements her income quite nicely.

Known for her signature look of huge hoe hoops and slut strands, the Westie gal can be identified by the presence of a dreamcatcher, which will either be tattooed on her body, or hanging from the rearview mirror of her 1993 Mitsubishi Lancer that smells of stale cigarettes and Impulse.

The Westie has a big soft spot for animals, and will have a minimum three cats in the house she shares with her three brothers. The lounge always smells of bong water, and there's definitely a thick, furry 100 per cent polyester blanket draped over the brown couch dappled with ciggy burns.

She's a down to earth chick, but has a short fuse - don't f**k with a Westie!

RELATED: Adding this one thing to your dating profile will get you 160% more matches

The southern babes are easily the hardiest women of Auckland, as demonstrated by their ability to wears jandals EVERYWHERE - rain or shine, summer or winter.

She's a firm believer in tights as pants, except when she gets glammed AF for a night on the lix in someone's garage or carport with a blue tarp wall. Moscato is a true fave (it's wine, Doll). She likely got pregnant just out of high school and if she's lucky - is still with the man #bless.

Despite having a severe case of resting bitch face, a Southern gal is actually a real sweetheart, always helping their mum, aunties, and cousins, and you'll NEVER go hungry as a guest in their house - especially if you turn up after church on Sunday.

She's a fierce defender of her mates, and god help anyone who crosses her because she looks like she could truly beat the crap out of you. Known for her mirror selfies that feature a horrifically messy room and a toddler in the background.