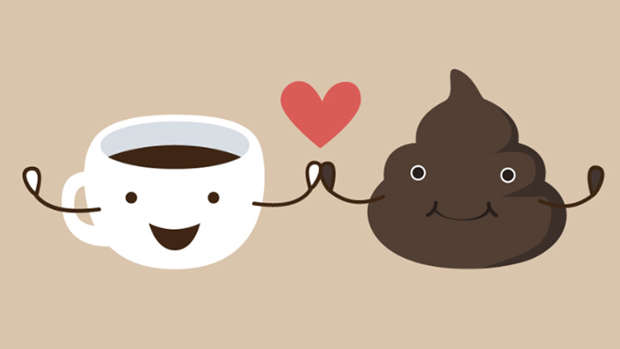 It's a familiar feeling for caffeine feens, chugging back a long black, then feeling your tummy churn as the urge to poo grows inside you.

Yes, you weren't alone in this, the post-coffee run to the loo is common.

The issue is actually so intriguing that a group of scientists wrote a research paper on the issue called ‘Effect of coffee on distal colon function'.

What the paper found was that time of day, diurnal rhythms, and even gender played a role in coffee sensitivity.

Through an experiment, they saw that within four minutes of ingesting regular coffee, the intensity and duration of pressure in the rectosigmoid colon increased rapidly, and remained higher than the basal period for at least thirty minutes.

I know science chat - it can get boring - but bear with us here!

This meant that the coffee-drinkers would be more likely head to the loo with number two within FOUR minutes of drinking a cup of joe.

Most interesting to note, however, was that they found a similar increase was seen following consumption of decaffeinated coffee.

While there haven't been any definitive answers on why exactly this is, it's believed that the bowel-stimulating quality of coffee isn't necessarily caffeine.

So now you can drink ya coffee and have your poo knowing that you're not alone.