A media services coordinator for a school in Maryland has been fired because of an inappropriate tweet to a pupil.

Katie Nash was fired after she jokingly tried to correct a student's spelling on Twitter.

At the beginning of the term, this student was probably feeling like many of us and tweeted the school asking if the school could be closed "tammarow".

Katie then replied jokingly asking the student how they would learn how to spell "tomorrow" if they didn't attend school. 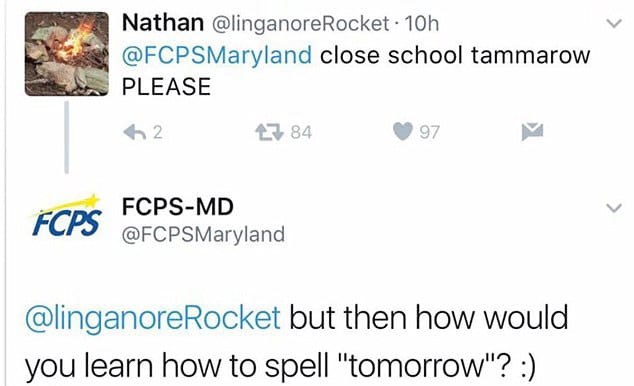 But on the Friday, she was sacked and warned not to tweet because of the ongoing ‘situation’.

However, Katie's post earned her retweets and likes and even sparked several hashtags including, #KatiefromFCPS and #freekatie.

A spokesman named Michael Doerrer confirmed Katie had been fired but did not provide anymore details.

Outraged that her jovial comment had ultimately led to her losing her job, she took to Twitter again to express her anguish and to state she expected more from the school.

"As a new employee, I think I sort of would have expected that there would have been some counselling or some suggestions on how to improve.

Any social media manager is looking for increasing engagement, and that’s sort of the expected parameter.

I think a conversation about how we engage with students would have been completely appropriate and I would have welcomed that."