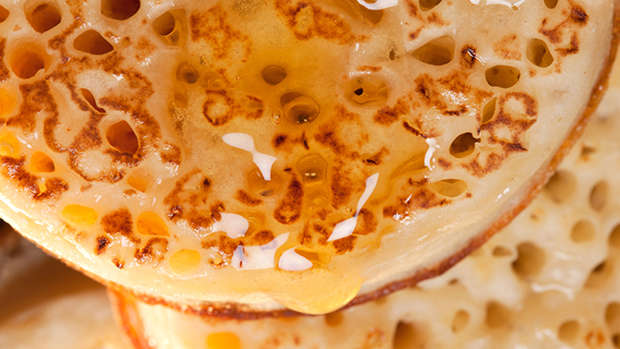 Crumpets are a classic treat but they are notoriously difficult to make at home because of the crucial bubbles that need to form on top.

But now Channel 4's Food Unwrapped series in the UK has revealed why there are holes in crumpets and how they are formed - which could make it easier to cook them in your own kitchen.

It turns out that the bubbles form during the vital fermentation process, and they need to then be cooked in a very specific way on a hot plate in order for the distinctive holes to appear and rise to the surface.

Co-presenter Kate Quilton discovered that a crumpet's characteristic bubbles form after the batter has been made, during the fermentation, during a visit to the Warburtons factory in north London.

Manufacturing manager Vas Nicolouzos couldn't reveal the secret to how long the batter needs to ferment for, but most recipes suggest proving it twice for about two hours, until it becomes frothy.

More importantly, the batter needs to ferment and prove in a very warm place, at about 40 Celsius, in order to form bubbles.

The next stage is to cook crumpets on deep, individual hot plates, which causes the bubbles to expand.

Steam from the bottom of the plate then shoots up through the batter, pushing the bubbles to the surface and creating a crumpet's iconic holes.

Nicolouzos told Quilton: 'The heat of the hot plate [causes] the bubbles to expand, and the steam generated behind it pushes the bubbles up through the batter.

"What you get is a chimney effect. Steam pushing the bubbles up causes the flutes which makes the holes in your crumpet."

The discovery explained why Quilton's fellow co-presenter Matt Tebbutt - a trained chef - struggled to make them in his own kitchen.

He tried to make them without proving the dough for very long, and in a shallow frying pan instead of a deep hot plate, but they ended up tasting like flat Yorkshire puddings.

But after proving for a longer time, Matt cracks the recipe and produces crumpets that nearly resemble factory-made treats.

This was first published on dailymail.co.uk and republished with permission.