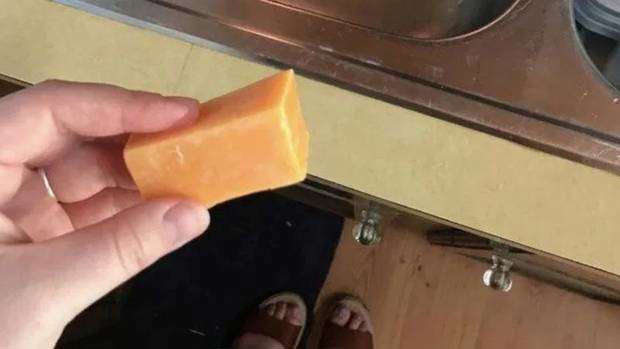 This takes loving cheese to a new level...

A woman in the US has become a global laughing stock after she revealed she had been washing her hands with a block of cheese, mistaking it for a bar of soap.

Miley, from Portland had become confused as to why her soap wasn't foaming as usual. For three days she continued to use the yellow block before realising it was a block of cheddar.

Miley explained she usually uses liquid soap for the dishes but keeps a bar of yellow unscented soap for her hands.

Taking to social media, Miley posted a photo of the block of cheese, revealing her hilarious blunder.

Miley wrote: "Just realised my soap wasn't working because it's literally a block of cheese.

"I use a liquid soap for the dishes, bar soap like dis is gentler on my hands after I do chores if that makes any sense [sic]."

But Miley admitted alcohol may have played a factor in her blunder.

She said: "It was a couple days of 'Why isn't this foaming?!'

"I come to realise it was a dried-out square of Tillamook sharp cheddar cheese.

"I suspect I left it out when I was intoxicated and just forgot."

Her post has gone viral, with others poking fun at Miley's mishap.

One asked: "But that must mean ... have we been eating Mac&Soap the entire week??"

"Does that mean you put the soap in the fridge?" another questioned.

"To be fair to you it does look like a block of soap."