After being skipped around the two-dimensional streets of London since 1935, the famous Monopoly thimble will no longer be.

Yup, one of Monopoly's most iconic pieces has joined it's mates iron, cannon and rocking horse, and it's all our fault.

After a worldwide vote that attracted four million ballots (and we were all welcome to join), the people have elected to give thimble the boot. We can only assume this has happened because all those tech-savvy people who contributed to the votes, probably don't even know what a thimble is.

thimble
noun
1. a small metal or plastic cap with a closed end, worn to protect the finger and push the needle in sewing
2. a short metal tube or ferrule We won't find out until next Monday which new piece has replaced our iconic thimble.

It isn't an option, but we hope it's Harambe. 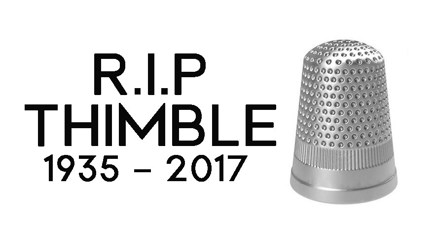