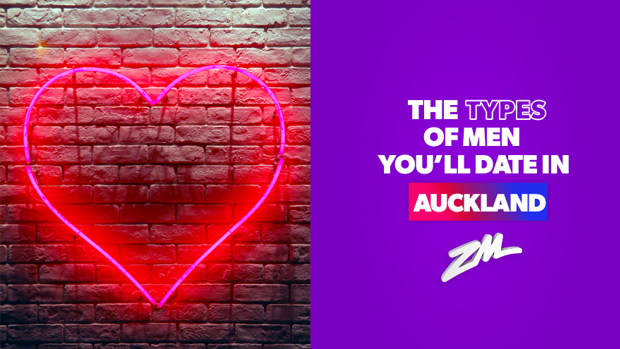 Dating in Auckland- like the rest of the country- comes with certain cliques of who you'll be dating.

We decided to break down the different types of Auckland guys you may date- and even though we can't cover every guy, it's pretty likely you've dated at least one of them!

Universally voted by my girlfriends as "THE WORST", this Howick/Pakuranga-dwelling Slick Rick will almost certainly have a poorly-considered full sleeve tattoo and be wearing a basketball singlet of a team they really couldn't care less about - just to show off the aforementioned sleeve.

They're most likely injecting 'roids to enhance those tattoo-adorned guns but denying it to their mates, claiming "it's just protein, bro!" All the while, they're skipping many a leg day.

The basketball singlet is complemented by a cap to hide the receding hairline (a common side-effect of the 'roids) and a pair of service-station bought speed-dealer sunnies.

When single, this fella is found on Tinder with a bio that reads, "Went to the school of hard knocks." If you let your guard down enough to find yourself in an Easty boy's lair, you'll encounter a pleather headboard with a dark brown, sateen duvet set from the early 2000s. Tread with caution.

Always wearing a hoodie, this guy is often overheard talking about rugby league, funny YouTube videos, or making fun of their sisters and cousins.

A key feature of a southside lad is that they'll rarely have a rego or WOF at the same time. That's if they have a car, mind you.

South boys always have their phones on pre-pay and will always be out of data. They're also often overheard asking if they can hotspot to connect their jailbroken iPhone with a smashed screen so they can message bae.

Always spells definitely as defiantly. And no matter their age, they'll still live at home with their mum.

RELATED: Women who date these types of guys are more likely to have a happy relationship

It's very rare that a man who says he's a central lad has actually grown up in this city.

They've migrated here from various outposts: suburban Auckland, or further afield. But they're all similar in a few ways - not least is their propensity for joining a CrossFit gym and hoovering up bags of coke at the weekend.

You'll stumble across them on Bumble, and when it comes to making a time to meet they'll say things like, "Let's grab a quick coffee" or "How are you placed this week?"

But you won't even have a chance to respond before you get: "I have a 10 then 2 then 4 so maybe after 5 but I have a client dinner at 7 so can't be too long but really want to meet you."

This is followed by the classic letdown, "Sorry, something came up, what about Tuesday in three weeks?" If you do indeed manage to pin one of these elusive creatures down, you'll likely endure a barrage of self-importance ranging from "I'm sooooo busy," to "I have a boat in the Coromandel, I work in real estate and I'm single because I'm fussy I guess."

The one-sided conversation will end with "I work hard now so I can have an early retirement." If you're still interested, you'll end up in a bedroom endowed with a white waffle duvet cover, a terrarium and an Ecoya candle on the nightstand.

Unfortunately, too much charlie will render him impotent for the night. You'll go home deeply unsatisfied and smelling of the Hugo Boss fragrance his mum bought him for his birthday last year.

If they do live away from home, it's likely to be in a scungy flat with at least three damp brown couches lurking outside. They'll only ever message you on Snapchat or Instagram, and they're still really close mates with all their high school crushes - all of whom they've banged, and one of whom they will eventually end up marrying.

Always cheersing the phone screen when they have a beer, you can find them en masse down at the Elephant Wrestler watching the UFC. Despite not really knowing what's going on, they will have loud opinions about it. These guys will definitely bum a Dunny Blue from a bystander outside, before going to shoot a panorama Insta story of Taka beach.

But Coast boys don't seem to learn from their mates' mistakes so I have no problem bringing it up again. These guys smoke a metric f**ktonne of weed, and they're so deeply obsessed with motorbikes and fishing that I have no idea how they ever get lucky with a lady.

They likely haven't washed their hair with actual shampoo in months, but they still have time to send snaps of their weekend benders, which include vids of themselves swigging and borderline violating girls - which is disgusting and you need to stop it immediately.

They organise massive weekend-long benders at their mum's house while she's away because they can't afford the Uber into town and back. These guys also grunt an awful lot. God only knows what that means.

RELATED: This guy created a dating app, and he's the only option

If you've ever dated a Westie, you know he's covered in regrettable tattoos and most likely drives either a rotary or a "vintage" Holden from 1987 that he sinks all his spare cash into.

He's got three kids to three different mamas, and disguises the onset of middle-age with a series of flat peak caps that fool no one. He listens to Eminem's Marshall Mathers LP from 2000 on repeat while he buys fake Nikes off Ali Express.

His most intense emotional output has been at one of those glass outdoor tables from Bunnings, while skulling two Codys at once. Can we please reiterate the TERRIBLE home-job tattoos?

Having said this, some of the girls were adamant they'd dated some absolute sweethearts from West Auckland: "I've dated a couple of the sweetest, kindest men who are Westies. Bogans who have Valiant Chargers, who got their old skate gang back together in their 30s and only listen to rare metal and stoner rock on vinyl. Beautiful expensive Japanese sleeve tattoos. Good cooks who drink expensive whisky and sensitive souls who are open with their emotions. Would build your kid a tree-hut and fix your car. It's fair to say I love a Westie."

We've all dated at least one of these guys- right up until we realised they weren't the cool, cute guy we thought they were!