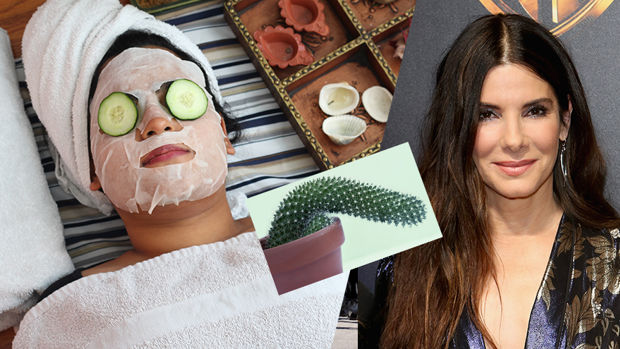 Sandra Bullock has gotten candid about the "foreskin facial" she and co-star Cate Blanchett swear by.

Speaking to Ellen DeGeneres on her daytime show, Bullock said: "I call it the penis facial And when you see how good it is to your face, you too will run to your local facialist and say 'give me the penis.'"

"Why would you want that?" Ellen said laughing. "Little penises are going to start growing out of [your face]. That's what karma is going to do."

The 'penis facial,' as coined by Bullock, is a very exclusive $650 treatment that uses micro-needling to open the pores and generate collagen and elastin. The serum that is placed on the skin derives from the foreskin of a Korean newborn baby.

During the episode, Bullock also answered a few of Ellen's "burning questions."

"What is the most rebellious thing you did as a teenager?" Ellen asked. She answered: "Got drunk at a marathon dance and wound up in the hospital getting my stomach pumped."

She also revealed her "most useless talent" is "Tying a cherry stem with my tongue", adding: "It could be useful".

The "co-star was the most fun to kiss" was Keanu Reeves, and "weirdest thing you've ever done for money" was that Bullock "used to open up for drag queens in North Carolina by dancing."

Bullock was on the show to promote her upcoming film Ocean's 8, in which she plays George Clooney's jailbird sister Debbie Ocean alongside several of Hollywood's leading ladies including Sarah Paulson, Rihanna, Cate Blanchett, and Anne Hathaway.

"I'm getting out of prison and I've had five and a half years to come up with this plan of stealing these specific jewels at the Met Ball. I pull the ladies together and we go and do it," Sandra said as she gave a quick synopsis of the upcoming film.