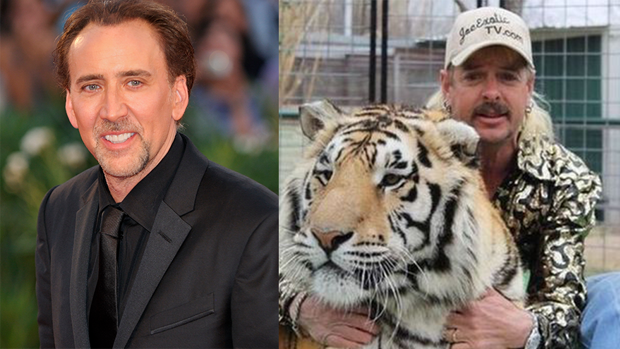 We did NOT see this coming...

Nicolas Cage is set to play Tiger King's Joe Exotic in a new scripted series about the controversial zoo owner.

The eight-part series will be based on the article Joe Exotic: A Dark Journey Into the World of a Man Gone Wild, written by Leif Reigstad and published in Texas Monthly.

According to Variety, the series will get up close and personal with Joe and detail how he "lost himself to a character of his own creation".

Despite being currently behind bars and serving a 22-year sentence for plotting to murder his nemesis Carole Baskin, Joe himself recently chimed in on who he'd like to play him in a scripted series.

In an interview with The Hollywood Reporter, Tiger King creators Eric Goode and Rebecca Chaiklin revealed Joe had requested either Brad Pitt or David Spade to play him in an adaptation.

Meanwhile Tiger King's Carole Baskin and her missing husband Don Lewis are set to be the focus of a new documentary.

Animal rights activist Baskin featured in Tiger King: Murder, Mayhem and Madness due to her acrimonious relationship with private zookeeper Joe Exotic, who is in prison for paying a man US$3000 to kill her. But the series renewed questions about her spouse, who disappeared in 1997.

Lewis was declared legally dead in 2002. After Exotic alleged Baskin killed her husband, true crime network ID announced a new documentary with a focus on the couple.

In a press release for the show, Investigating the Strange World of Joe Exotic, ID said: "Love her or hate her, Carole is now in the centre ring of the big cat circus. Despite her claims of innocence, did she orchestrate the disappearance of Don Lewis to seize control of his fortune, consolidate power and lay waste to her foes?

No one seems to be talking - except for one man - and that man is the centre of ID's upcoming investigative series."

This article was first posted to nzherald.co.nz and republished with permission.