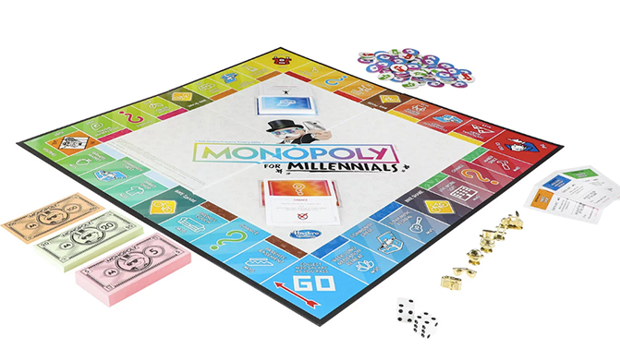 'Forget real estate. You can't afford it anyway' seems to be the motto of the new Monopoly: Millenial addition.

Monopoly has caused a lot of arguments over the years, but it's always been a little unrealistic right? Who has a $100 in their wallet, like ever?

Well now Hasbro, the game's creators, has announced a new version of the game that might be just a tad more relatable for us in the more recent generations...

Yup, in this version you won't be travelling around the board buying property- because no one can afford a house these days- but instead, purchasing 'experiences'.

Just like real life, you will also have a much, much smaller pool of money, because they get us.

The more I learn about #MonopolyForMillennials the better it gets.
I must own this game. pic.twitter.com/TN6fTlEZBb

Destinations range from your parent's basement to yoga retreats, while chance cards include such gems as 'Your mum posted bail' and 'Your lifestyle vlog reaches one million views'.

The player with the most experiences at the end wins the game.

RELATED: Here's a new way you can cheat on Monopoly

As always, there is a small part of the internet, who clearly just can't find the fun in laughing at yourself, but mostly people are laughing at the chance Hasbro has taken.

While the humor is a little on the nose, my only real complaint about Monopoly for Millennials is that the dollar denominations are too high. I can't remember the last time I had a hundred dollar bill in my wallet. pic.twitter.com/z1IXuBxMRt

Oh, and did we mention the board is pretty hilarious too?

I’m fucking dead 😭 look at the board

We're dying to get our hands on it just to see if we can change how our life turns out!