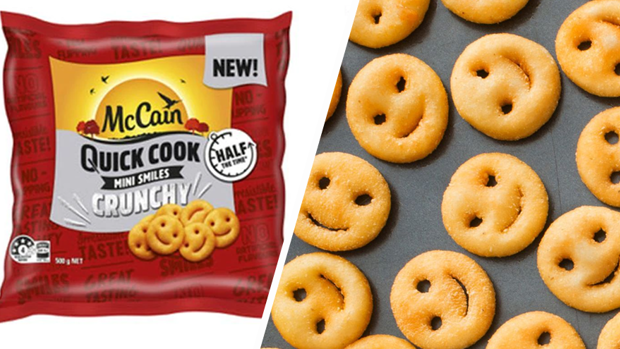 Cast your mind back to simpler times... You're thinking about McCain 'Potato Smiles' aren't you!

Great news - The legends at McCain have brought back these beloved childhood faves, but slightly smaller so we can eat them twice as fast.

Introducing McCain's Mini Smiles! Made exactly the same as the classic smiles, just slightly scaled down.

The original Potato Smiles disappeared from supermarket freezers in 2009, and since we have never quite recovered, there has been a public outcry both here and across the ditch.

The release of Mini Smiles was met with plenty of excitement on Facebook from fans of the crispy carbs, with one shopper saying they planned to “stock up”.

“Oh great, now they’re half the size, so I’ll be eating twice as many,” one person joked.

“These were my childhood,” another commented.

We wholeheartedly agree! And according the the McCain website, these things of beauty can be purchased from supermarkets right across the country.

It's safe to say we can't wipe the 'smiles' off our faces!