If you're a fan of fried chicken, with a passion for fashion, this could be for you!

KFC has just released a brand new set of Crocs that could be a total game-changer- because they smell like fried chicken.

Yup... you read that right. 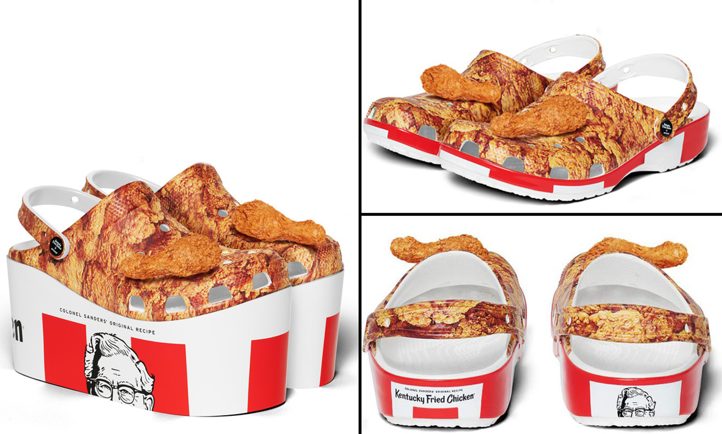 The shoes first debuted at New York Fashion Week in February alongside other streetwear-meets-food collaborations such as Supreme's limited-edition Oreos.

The KFC Crocs have appeared in a commercial for shoes where South Korean artist Me Love Me A Lot can be seen removing a pair of crocs from a deep fryer.

Both the heeled Crocs and regular version have a fried chicken pattern and come with drumstick-scented Jibbitz charms attached to the top.

The KFC Crocs cost $US60 and included two charms. However, fans couldn't get enough of the hot and spicy deal with the shoe selling out inside 30 minutes.

Coming soon! The saying is true, good things and Crocs that look like a bucket of fried chicken come to those who wait. Kentucky Fried Chicken x Crocs Classic Clogs are finally being served on July 28th at 12 PM ET. #KFCCrocs @kfc https://t.co/yI9I36nf3N pic.twitter.com/dtY3vIxrDQ

The fine print states these Crocs "are not for human consumption", unlike the unbelievably realistic Crocs-themed cake confusing the internet.

Fans took to social media to rave about the KFC Crocs.

"This is what I've been waiting for my entire life," one said.

Another added: "Is this for real? I never knew I needed chicken crocs, but here I am."