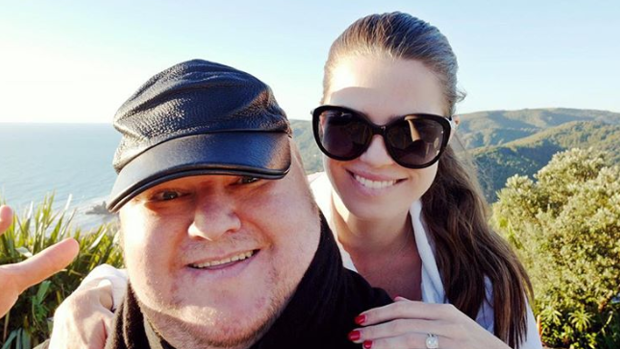 He's the controversial, larger than life web mogul. She's the young law student, half his age, who shocked many by becoming his wife. Daisy Hudson sat down with Kim and Liz Dotcom to hear about their new life in the South.

At first glance, it looks a bit like a show-home.

A multimillion dollar one, sure, but lacking in the personal touches that makes a house look lived-in.

There's no pictures on the walls, no candles or ornaments or trinkets, no bookshelf.

If it wasn't for the two black SUVs outside, and the huge photo of the web mogul standing on what appears to be a rocky shore, you wouldn't know the sprawling mansion belongs to one of New Zealand's most controversial men, reports Otago Daily Times.

t's been about a month since Kim Dotcom, his new wife Liz, and their apricot Maltese poodle Toby escaped the Auckland rat-race and moved to the outskirts of Queenstown.

It followed a tumultuous start to 2018 for the internet magnate/former politician/musician.

He married Liz, 22 and half his age, in January on the sixth anniversary of the infamous 2012 raid on his palatial Coatesville mansion.

Luckiest girl in the world 💕 Speechless

In February, his long-running extradition case headed to the Court of Appeal, after a High Court judge upheld a previous ruling he was eligible for extradition to the United States on charges of racketeering, wire fraud and money laundering.

And in March he claimed victory after the Human Rights Tribunal found the Attorney-general broke the law by withholding information from him.

Since then, apart from a few social media posts, the German multimillionaire has stayed under the radar.

It might seem at odds with his larger-than-life personality and high public profile, but Kim takes his privacy seriously.

One of the things he likes about Queenstown, he says, is that people are relaxed and "mind their own business".

In his first interview since moving south, Kim is more serious, more guarded, than you might expect.

Liz Dotcom plays in the snow with three of Kim's children at the Dotcoms' new home near Queenstown. Photo / Daisy Hudson

There are flashes of his boisterous public persona — when he plays with Toby, or laughs as Liz describes his extradition case cropping up in her law classes at university.

But for the most part he's considered, thoughtful and always in control.

His quiet life in Queenstown is a world away from the drama of his time in Auckland.

It was on January 20, 2012 that he burst into New Zealand's public consciousness when police conducted a massive armed raid on his home.

RELATED: Does Kim Dotcom and his 22-year-old wife really have sex? The new Mrs Dotcom reveals all

The United States wanted, and still does, to extradite him to face a raft of charges relating to his now-defunct Megaupload business.

Did he ever think, more than six years after that day, his case would still be going?

"I thought this whole thing would be over within a year. I was pretty understanding of the legal position early on. I thought this all, just they made a huge mistake," he says.

"Actually, on the first day when we first got arrested, I remember it very vividly, me and my co-defendants were waiting to be presented to the judge for our first bail hearing and I told them, you know, 'they have no leg to stand on, they don't have a chance to win this, we're going to sue them and it's going to be embarrassing', and I've said it from day one."

He's still optimistic, but admits there are times he worries about the outcome.

"I'm by nature an optimistic person, positive thinking, but I also know when I'm right. When I'm wrong I'm happy to accept liability and apologise and move on.

"I knew that I had done nothing wrong. I knew that I was dealing with things according to the law. We always had high-paid lawyers giving us advice. I never again, after my youthful indiscretions with the law, wanted to be in another situation like that so I had good legal advice.

"So I would say the vast majority of the time I was quite positive. The only problem about this case, and that is the big unknown, is the political nature of it."

As for Liz, she appears shy but friendly.

She happily chats away about her last semester at uni and how beautiful the overnight snow on the mountains is.

But once the interview starts she's quiet, listening but rarely interjecting.

When asked if it was tough marrying someone with such a massive legal burden hanging over their head, she shrugs noncommittally.

"Yeah, I knew about it from the start, but Kim's so positive, so it has a good feeling, you know."

The Dotcoms are in Queenstown for the long haul, they say.

Kim's five children moved to the resort last year, with his ex-wife Mona.

They've settled into school, Kim says, and love it here.

Kim already has his eye on business opportunities, from real estate investments to a luxury cinema.

The Dotcoms are also on the hunt for live-in staff, a search that sparked a barrage of interest on social media when Kim tweeted about it.

"Yeah, we received quite an impressive amount of CVs actually, and we have had a couple of meetings, and there are two or three candidates that we feel good about," Kim says.

But he's taking his time, making sure he finds the right people to help with his children, because they're planning to be in Queenstown for a while.

This article originally appeared at nzherald.co.nz and has been republished with permission.