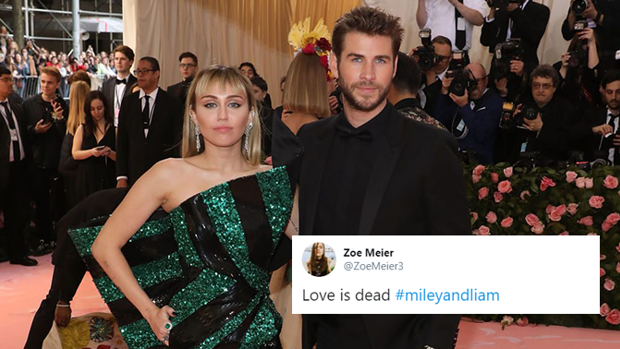 Miley Cyrus and Liam Hemsworth have dramatically called it quits less than a year after tying the knot.

The singer and the Aussie actor yesterday, issued a statement confirming that the previously loved up couple, had separated.

"Liam and Miley have agreed to separate at this time," a spokesperson for Cyrus told People magazine in a statement.

"Ever-evolving, changing as partners and individuals, they have decided this is what's best while they both focus on themselves and careers. They still remain dedicated parents to all of their animals they share while lovingly taking this time apart. Please respect their process and privacy."

So apparently.. Miley and Liam are no longer together and now she's dating Kaitlynn Carter. Thoughts?

The shock news came after Cyrus was snapped on Lake Como kissing Kaitlynn Carter. Carter, who recently split from Brody Jenner, and Cyrus quickly blew up Twitter after being spotted.

And fans were NOT happy.

I used Miley and Liams love to fill my sad single heart. Now that they broke up I feel empty🥺 #mileyandliam pic.twitter.com/hG1uxGBVoR

Others, saw it coming...

People shocked about Liam and Miley getting divorced but didn’t they like break up all the time #mileyandliam pic.twitter.com/gkX5sux2vL

Either way, I think we can agree that love is dead.

My heart is hurting, I fear there is no such thing as love #mileyandliam