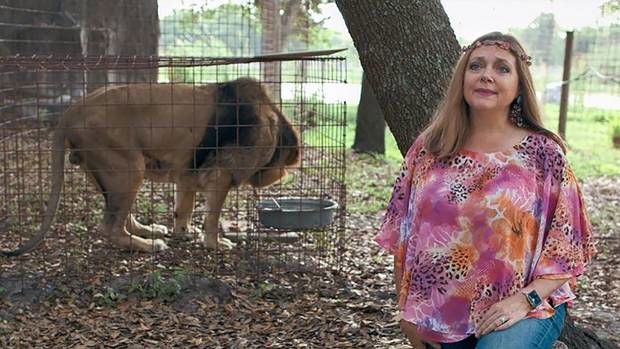 Killed her husband, whacked him... or did she?!

A woman has come forward with new information about the death of Carole Baskin's husband.

The cold case rose to fame on Netflix's Tiger King documentary, and Baskin maintains she had nothing to do with her husband's disappearance.

A woman named Trish-Farr Payne has given an interview with CBS series 48 Hours Suspicion, and claims her ex-husband played a role in the disappearance of Don Lewis, Fox News reports. The man, named Kenny Farr, worked as a handyman for Baskin and Lewis. The episode airs on September 9 in the US.

In a preview of the episode, Farr-Payne says her ex-husband instructed her not to speak of Lewis after his disappearance in the late 1990s.

"Don's gone, and I don't want you talking about him," she claimed her ex-husband said.

Farr-Payne spoke about some chilling events she witnessed in the wake of the disappearance of Baskin's husband. She claims someone left a large freezer on her front porch with a padlock on it a week after Lewis disappeared.

The Tampa Bay Times reports Farr-Payne informed authorities about her suspicions regarding her ex-husband in 2000.

According to Refinery 29, the episode called The Tiger King Mystery includes interviews with Lewis' ex-wife and three daughters.

Baskin has been the subject of numerous conspiracy theories about her husband's disappearance and has denied several times that she had any involvement in the case.

The Tiger King star is also set to compete on the new season of Dancing With The Stars, and she hopes fans will see "the real her".

She told Good Morning America: "'Tiger King really glamourised animal abusers and villainised me for trying to stop animal abuse, and so I felt really betrayed by that. But what amazed me was how many people believed that false portrayal of me without doing anything to find out who I really am. It's been a nightmare since 'Tiger King' aired."

This article was written by nzherald.co.nz and republished with permission.