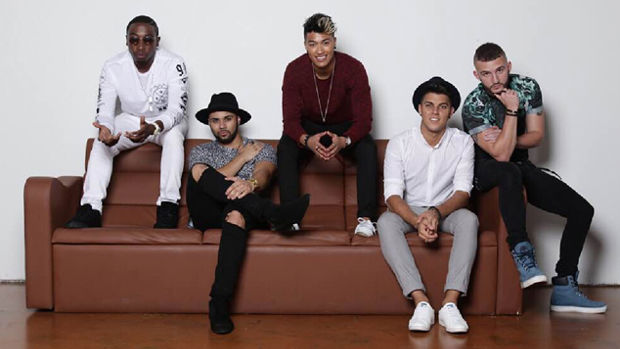 Shaquille Paranihi-Ngauma, TK Paradza, Andrew Papas, Zac Taylor and Haydn Linsley - who make up Titanium - are living the dream in the United States. But they haven’t forgotten their roots and they’re now poised to set the Kiwi airwaves alight yet again, with the sizzling summer anthem ‘Best Weather’.

Written and produced by American songwriter, producer and rapper, Jazze Pha, ‘Best Weather’ is already doing damage on US radio, reaching number one on the independent radio play charts.

The catchy-as-hell tune, builds on the upbeat vibe that turned Titanium into an overnight sensation. With smooth melodic harmonies and power-packed vocals, the five-piece up the ante in the feel-good stakes, delivering a song that’s guaranteed to raise the roof at many a club and party this summer.

The five-piece has gone from strength-to-strength, opening for mega stars such as Mariah Carey, Jason Derulo and Will.I.Am, to Cher Lloyd and Hot Chelle Rae.

Titanium also performed the American national anthem in New York at the world-famous Madison Square Garden for the game between New York Knicks and Boston Celtics.

Not bad for five young lads plucked from obscurity a mere three years ago. This is the next stop in Titanium’s soaring rollercoaster of a ride. Jump in and buckle up.