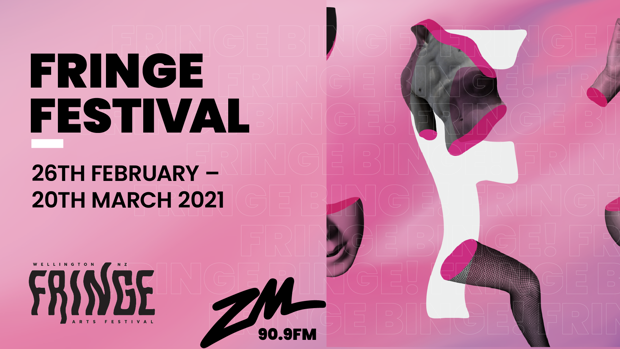 Fringe is New Zealand's cutting-edge arts Festival and it’s back for 2021!

Three weeks of artistic innovation, exploration and organised chaos – something you do not want to miss.

From cabaret and modern musical theatre at 'Just a Taste'

Comedy at 'Suits and Ties' and 'Travails with my Ex'

Whatever you're into, it's probably there at Wellington's Fringe Festival

To find out more and book your tickets, go to fringe.co.nz

Be sure to keep an eye on the ZM’s Black Thunders Facebook and ZM Wellington Instagram pages for chances to win with Fringe Festival!

Check Out ZM’s Top Picks Below!

● Cupid's Guide to Modern Romance - Live Parts/Comedy/Improv - Come join us for an improvised, romantic fling that revels in the true awkwardness of dating. Each night, our cast of improvisers will create a different pair of unlikely lovers, send them on a date, and see if we can finally figure out how this love thing works.

● Suit and Ties - Naughty Bits/Comedy - Comedian Li'i Alaimoana has stayed away from two things since performing on stage: Wearing a suit, and his ties to the security industry through his 'Bouncer' days. Laughs a plenty as he merges both in an hour of stand up comedy.

● Travails with my Ex - Live Parts/Comedy/Storytelling/LGBTQIA+ - Have you ever decided what you need to do after a break-up is travel to Thailand to find yourself...*with* your ex? Combination of heat stroke, sleep deprivation and drug sniffer dogs can put any friendship to the test. Travails with my Ex – Part Deux is a comedy-horror-story-telling-filled fiesta, about where good intentions can take you.

● Bald Man Sings Rihanna - International/Comedy - Heard a bald man sing Rihanna? Fresh from sold out runs in Edinburgh & seen at the biggest comedy clubs across the world, including Caroline's on Broadway – Scotsman Sansome returns for one night only taking an irreverent look at music and popular culture. 'hour of pure entertainment and hilarity' ★★★★★ (Bunbury Magazine)