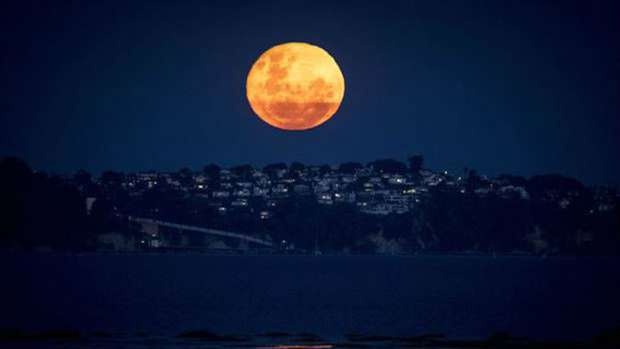 Michael Craig took this photo of the first in the 'Supermoon trilogy' on December 5th, 2017. (Photo: Michael Craig/NZ Herald)

On January 31st 2018, we were treated to one of space's rarest sights, when a Super Blue Blood Moon lit up the night sky.

A Super Blue Blood Moon happens when a blue moon (the second full moon of the month), a blood moon (referring to its reddish hue) and a super moon (when the moon is as close to Earth as it can possibly be) all occur at the same time, a combination that's very, very rare. It hasn't happened in 150 years.

But in addition to the spectacular visual dessert, social media lit up with people claiming they'd been feeling out of sorts and overly emotional in the lead up to the lunar trifecta phenomenon.

Children, including babies, and pets, are said to be acutely affected by the moon.

Anyone else with the super blue blood moon on your period making your emotions go from 0 to 100 with no in between? Cause, same. Also, I'm a Cancer ♋️You Scorpios ♏️out there must be feeling ALL THE FEELS.🙅🏻 🌑🔴#supermoon  #BlueMoon  #BloodMoon  #synced

If you ask any credible scientist or medical professional and they will tell you there is absolutely zero scientific evidence that the moon can impact our emotions and mood.

However, many are actually armed with plenty of stories about people acting strangely, feeling more depressed and even a spike in crime rates. And when you pull together these anecdotes of evidence, we end up with quite the argument.

First up, there's research that suggests the lunar cycle can have a big effect on how much sleep you get - with full moons linked to less deep sleep. And, of course, less sleep often means cranky people, meaning there's a chance the super blue blood moon might not leave you feeling so super, after all.

"One survey in the USA found that about 40 per cent of the general population, and 80 per cent of mental health professionals, believe that the phase of the moon affects human behaviour," scientist Dr Karl Kruszelnicki wrote for the ABC.

"And yet, 99 per cent of the evidence says that the moon has no effect on human behaviour."

Therese March, a former senior constable with NSW Police, said she would prepare herself for a busy, eventful night shift when she worked during a full moon.

"Our busiest time on the job would always be after dark when it was a full moon and they'd always be unusual jobs or people doing stupid things. They'd never be ordinary," Ms March told news.com.au.

"We'd get weird noise complaints. I remember one man using his power drill in his garage in the middle of the night. We said 'Of course it happened on a full moon'.

"It was just odd behaviour ... stupid complaints and unusual complaints. They all seemed irrelevant at the time but they were always during full moons."

"I'm sad to say there's as much strange behaviour on any given night as there is on a full moon."

So the jury's out really - had you noticed your mood shift over the past week?