Uh oh, Rebel Wilson really should have fact checked before going on a massive twitter rant...

The actress is being sued for defamation after she called out the wrong Elizabeth Wilson on Twitter calling her "total scum". 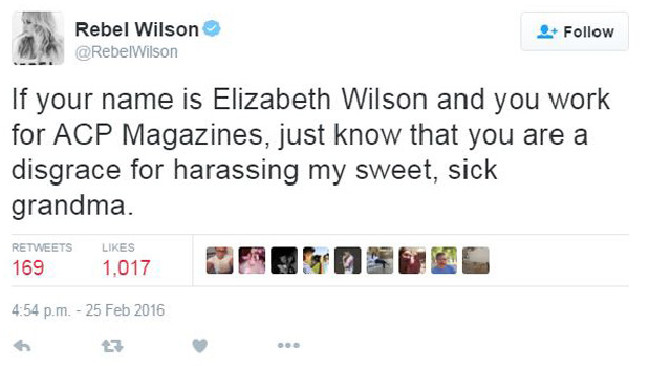 Back in February, a journalist called Elizabeth Wilson went door knocking at Rebel's grandmother's house looking for a story.

Rebel went on a Twitter tirade, calling Elizabeth Wilson 'a disgrace,' and even posted a headshot of the journalist branding her as 'total scum'.

The problem was, Rebel had the wrong Elizabeth Wilson. Rebel has 2.5 million Twitter followers, so the tweets went far and wide and Elizabeth was inundated Twitter hate as a result.

Rebel has hired a legal team to fight the lawsuit arguing only a small portion of her followers are based in Australia and she corrected the tweets less than three hours later.