New Zealand musicians are banding together for two benefit concerts to raise funds for those affected by the Christchurch terror attacks. Auckland tickets will be on sale Midday Today, with Christchurch tickets on sale Friday 29th at 4 PM. 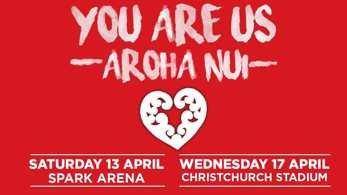 On Saturday April 13 at Auckland's Spark Arena and on Wednesday April 17 at Christchurch Stadium, artists such as Bic Runga, Marlon Williams and Fat Freddy's Drop will perform at the You Are Us/Aroha Nui concerts.

All proceeds from ticket sales will be donated to the Our People, Our City fund, which was set up by the Christchurch Foundation to support the Muslim communities affected by the tragedy. Tickets will be $79.00 for Adults and $39.00 for Children (12 years old and under)

More acts are expected to be announced in the coming days.

"The impact on our Muslim communities has been huge and they are going to need ongoing support for a very long time," she says. "The response of the music industry has been magnificent and we are all grateful for the significance of this contribution to the Muslim community's long term recovery."

The show is produced by main promoters within the music industry, including Eccles Entertainment and Live Nation.

Tickets will be available from Ticketmaster for the Auckland show from Thursday March 28, and Ticketek for the Christchurch show from Friday March 29.