KJ Apa is already one to stun with his devilish good looks, but he's stunned fans even further with his latest outfit choice.

The Kiwi actor stepped out onto the red carpet in a striking full white suit.

Dressed head to toe in a white suit, complete with a turtle-neck skivvy, white shoes and a spikey ‘boy-band’-inspired hair do – KJ looked very 1990’s.

The boys are now rocking turtle necks. @boston.ridge @henryauton cheers for the inspo & confidence. And... of course... @warrenalfiebaker the best stylist in Los Angeles ☺️☺️ love u all! And thanks Toronto for all the LOVE

We got some definite Zoolander vibes - check out this side by side! 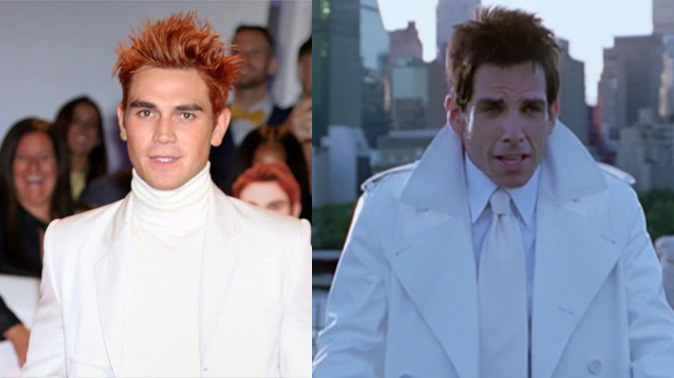 The Riverdale star donned the ‘white-out’ look for the The Hate U Give premiere during the Toronto International Film Festival in Canada.

Apa posted an image of his outfit to his Instagram and fans went wild for the unusual get up, likening his look to other iconic fashion statements.

RELATED: Spotted the scar between KJ Apa's eyebrows? Here's how he got it

“Omg is that a backstreet boys member?” says one fan

“All I see is Tilda Swinton,” says another

We love your dedication to fashion Mr. Apa!