Katy Perry seems to be having a tough time promoting her latest album Witness because she's taken a leaf out of Shia LaBeouf's book and is live streaming her whole life for the weekend for publicity.

Get it? So you can "Witness" her life? According to People Magazine, five cameras are broadcasting from inside a Los Angeles residence capturing everything from obvious publicity stunts (like yoga with Jesse Tyler Ferguson) to the most mundane activities (like Katy eating and sleeping).

The pop star spent a lot of time sleeping on camera and then spent the morning dancing to her own record and showing off her dog to the camera while her team made breakfast for her. And then for 20 full minutes, fans got to watch Katy Perry meditate in complete silence.

Perry repeatedly broke down as she spoke with the therapist about everything from her difficult relationship with her parents to her past battles with alcoholism. 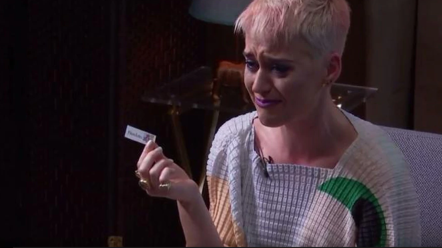 At one point, as she discussed her past battles with alcohol, a minder could be heard forcefully suggesting she stop the livestream. She refused.

She admitted to thoughts of suicide in the past: "I wrote a song about it. I feel ashamed that I would have those thoughts, feel that low and that depressed."

"You can be right or you can be loved. I just want to be loved," she said.

The 32-year-old singer also addressed her Katy Perry alter ego and what it was like to leave behind Katheryn Hudson.

"That's the point of this whole thing, if people can see I'm just like them then they can dream just as big.