It's a far cry from the electric rush of New York, but Daniel Radcliffe looked at home in the suburbs of west Auckland.

The Harry Potter star spoke to the Herald on Sunday at Studio West Film Studios in Glen Eden yesterday as he wrapped up filming his new action movie Guns Akimbo in New Zealand.

Radcliffe raved about Auckland's dining scene and said he had eaten well during his stay, reportedly eating at SkyCity restaurants and even an Indian takeaway.

"We've been eating really, really well. Auckland has many fantastic restaurants so I've been doing a lot of that, but I definitely will be coming back here on holiday.

"It's been great, but I've not done many of the exploring things that one would do if you were just coming here and not working, so I'll be coming back here for sure."

The actor also took some time out to explore some of Auckland's beaches during his stay and was spotted working out at Auckland central city gym Anytime Fitness.

Radcliffe was due to leave New Zeland this weekend to continue filming in Germany for his new movie, directed by Kiwi Jason Lei Howden.

He praised the "extraordinary" Kiwi crew he's worked with, who he said had been a "complete delight".

"It's a really ambitious shoot and everyone has been working their arses off and those are the kind of atmospheres that are really lovely to work in," Radcliffe said.

ARE YOU HARRY, RON OR HERMIONE? TAKE OUR QUIZ:

"This is an action movie and we're not shooting with the budget of some crazy studio action movie, so we're relying on ingenuity and resourcefulness and people working really hard and working really smart, and everyone has been amazing at making [director] Jason's vision come to life."

Radcliffe fans got a chance to see the actor in the flesh while he was filming in Auckland in March. 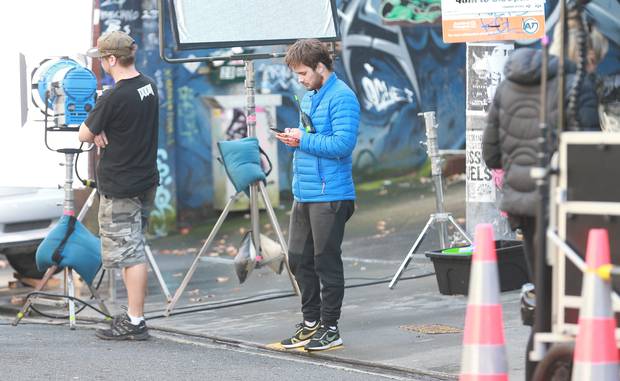 Parts of the city became a movie set, with Cross St operated under a stop and go system, allowing passersby to glimpse the Harry Potter star.

"If you see me around Auckland looking very worse for wear and covered in blood and bruises, don't worry, this is probably for filming," Radcliffe said in a statement at the time.

Radcliffe talked about being known just as Harry Potter to many people, despite having starred in other films.

RELATED: This deleted scene from Harry Potter changes everything you thought about Draco Malfoy

"I want people to see me as an actor and not just one character but some people see me as Harry Potter forever and don't see any of the other films, that's fine too. It's not affecting me getting work so I'm not too worried about it."

He said it was lovely that something he was involved with meant so much to so many children.