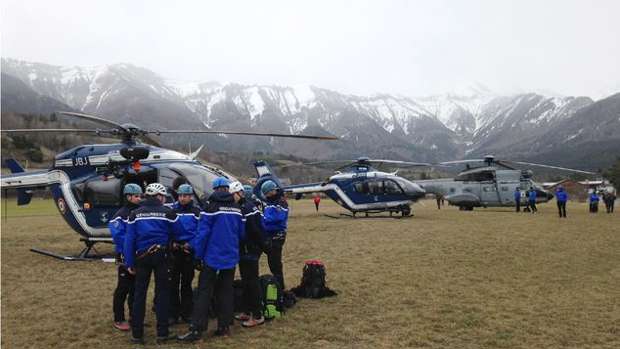 A plane operated by the budget carrier of Germany's Lufthansa has crashed in a remote area of the French Alps, killing all 150 on board in the worst aviation disaster on French soil in decades.

The accident's cause is a mystery but authorities have recovered a black box from the Airbus A320 at the crash site, where rescue efforts were being hampered by the mountainous terrain.

Victims included an Australian mother and son, as well as 16 German teenagers on a school trip.

The mayor of the children's hometown called it "the darkest day in the history of our city."

At airports in Barcelona and Duesseldorf, the departure and destination, some relatives wailed in grief.

Local MP Christophe Castaner, who flew over the site, said on Twitter: "Horrendous images in this mountain scenery. Nothing is left but debris and bodies.

"A horror - the plane is totally destroyed."

Video images from a government helicopter flying near the area showed a desolate snow-flecked moonscape, with steep ravines covered in scree.

Debris was strewn across the mountainside, pieces of twisted metal smashed into tiny bits by the violence of the crash.

German Foreign Minister Frank-Walter Steinmeier, who also made a pass over the crash site, described a "horrific sight."

"The grief of the families and loved ones is immeasurable. We must now all stand together. We are all united in great sorrow," said the minister.

Budget airline Germanwings said the Airbus plunged for eight minutes but the crew made no distress call before crashing near the ski resort of Barcelonnette, according to French officials.

"A black box was found and will be delivered to investigators," Interior Minister Bernard Cazeneuve said.

Weather did not appear to be a factor in the crash, with conditions "calm" at the time.

"There was no cloud at the plane's cruising altitude", winds were "light to moderate" and there was no turbulence that could have contributed to the crash, French weather officials said.

Lufthansa said it was working on the assumption the crash was an "accident".

She said the 24-year-old Airbus A320 had undergone its last routine check on Monday.

French civil aviation authorities said they lost contact with the aircraft, carrying 144 mainly Spanish and German passengers - including two babies - and six crew at 10:30am.

Germanwings said 67 Germans were believed to have been on board while Spain said 45 people with Spanish-sounding names were on the flight.

French President Francois Hollande said he would meet his German and Spanish counterparts at the crash site on Wednesday.

The dead included Germans, Spaniards and "probably" Turks, Hollande said, while Belgium and Denmark said at least one of their nationals was on board.

Australian Foreign Minister Julie Bishop said a Victorian mother and her adult son were among the victims, as was singer Oleg Bryjak of the Duesseldorf opera house.

"We have lost a great artist and a great man ... We are shocked," said Christoph Meyer, general director of the opera house.

It was the first fatal accident in the history of Germanwings, and the deadliest on the French mainland since 1974 when a Turkish Airlines plane crashed, killing 346 people.

The world's worst air disasters remains the March 27, 1977, collision of two Boeing 747s on the runway at Tenerife in the Canary Islands, killing 583 people.