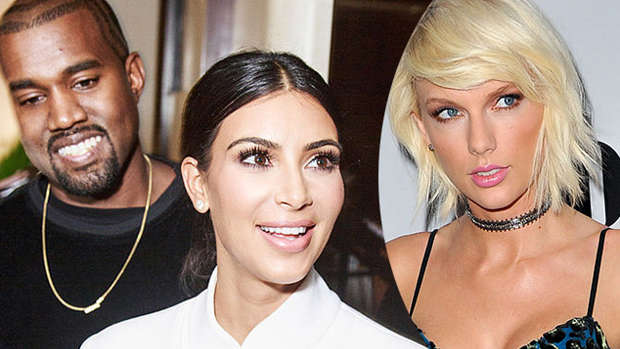 Kim Kardashian West has taken to Snapchat to defend her husband Kanye West's, posting a series of videos that prove Taylor Swift gave West permission to rap about her on infamous The Life of Pablo single "Famous."

The drama all began when Kanye released "Famous" and the rest of The Life of Pablo in February. Swift sent out a statement condemning the line and West used a series of tweets to claim that Swift had approved the line well before it was released. When she won the Grammy for Album of the Year a few days later, she used her speech to allude to unnamed enemies who "will try to undercut your success."

Kim then told GQ that Swift had approved the line and suggested that her conversation with West had been caught on camera, only to get blocked by Swift's legal team once they learned about its existence.

You can watch the full Snapchat video below, but because it'd hard to hear some parts we've got the conversation written below.

Here is the entire conversation Taylor & Kanye had, judge for yourself. pic.twitter.com/InTjvPGKe3

Kanye: “You still got the Nashville number?”

Taylor: “I still have the Nashville area code but I had to change it.”

Kanye: “For all my south side niggas that know me best I feel like me and Taylor might still have sex”

Taylor: “I think this is a really cool thing to have”

Kanye: “I know, it’s like a complement, kind of. What I give a fuck about is is you as a person and a friend. I want things that make you feel good. I don’t wanna do rap that makes people feel bad”

Taylor: “…it’s obviously tongue in cheek either way, and I really appreciate you telling me about it, that’s really nice”

Kanye: “I just had a responsibility to you as a friend, thanks for being so cool about it.”

Taylor: “Aw thanks. Yeah, I really appreciate it, the heads up is so nice… I would never have expected you to tell me about a line from your song. and the flowers that you sent me, I Instagrammed the picture of them and it was the most Instagram likes I’ve ever gotten…”

Kanye: “Relationships are more important than punchlines, you know.”

Taylor: “Yeah, I don’t think anyone would listen to that and be like oh that’s a real diss, she must be crying about it… You gotta tell the story the way that it happened to you and how you experienced it. You didn’t know who I was before that, it’s fine… I’m always going to respect you and I’m really glad that you have the respect to call me and tell me about it as a friend…It’s a really cool thing from you and a really good show of friendship so thank you.”

Kanye: “Thank you too”

That moment when Kanye West secretly records your phone call, then Kim posts it on the Internet.

SHIT!!! Things are really getting crazy in this whole feud!! We can't even predict what's gonna happen next!!