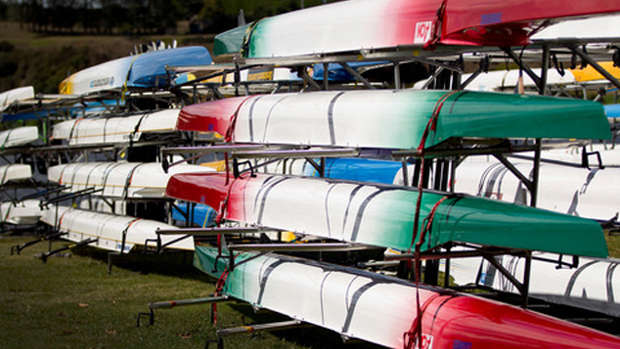 The father of one of the St Bede's boys at the centre of the rowing row has stepped down as the school's rowing club chairman.

They were caught riding on the baggage conveyor at the Jetstar carousel in the arrivals hall at Auckland Airport's domestic terminal.

The pair were given formal warnings by police and the Aviation Security Service (Avsec) after the prank shortly after arriving on a domestic flight from Christchurch.

Lawyer for the parents, Andrew Marsh, has confirmed to Newstalk ZB that Shane Kennedy stood down from his role as chairman of the St Bede's rowing club yesterday.

Mr Kennedy decided to step down because of his personal involvement with the case, Mr Marsh said.

The school decided that Jordan and Jack, aged 16 and 17, were in breach of the school's code of conduct and banned them from competing at the regatta, which started this morning.

But the boys' parents sought an urgent injunction at the High Court in Christchurch to allow their sons to row in the first race at 11.28am today.

In a decision released before the race, Justice Dunningham granted an interim injunction to prevent St Bede's from stopping the boys rowing at the 2015 Maadi Cup.

Lawyers for the boys' parents also tried to have their names suppressed, but the judge declined to make a name suppression order.

A spokesman for the Civil Aviation Authority (CAA) said the pair were spotted "instantly" once they passed through the rubber curtains by a Jetstar ramp agent.

The Jetstar rep called his supervisor who, in turn, involved Avsec.

"The boys apologised immediately and said they did it for fun," the CAA spokesman said.

"We were satisfied no breach of the sterile area occurred as the boys were spotted by Jetstar staff from the moment they emerged airside, after which they were escorted out of the airside baggage area to landside, almost immediately.

"We do understand that students travelling as a group can get quite excited and have a lot of nervous energy, but they must understand that in airport environments there is zero tolerance for games or pranks and we would discourage any further instances of this type of behaviour.

"The boys are very lucky they got off with a warning and that there was no risk to the safety and security of other passengers or airport staff."

As is customary under CAA regulations, the CAA will be reviewing all details of the incident and consider if any further action is required.

The Maadi Cup regatta at Lake Karapiro is the largest national rowing regatta for New Zealand school students, with 2196 participants from 122 schools.

United Future leader Peter Dunne, himself a former St Bede's pupil, has tweeted his support for the boys.

The boys' antics were not "a harmless prank" but said it was "not for the school to resolve".

"The boys' irresponsible conduct is for their parents, Police and Aviation Security to deal with, not the college," he said.

"Schools often assume too much authority in cases like this for reputational reasons only."

Mr Dunne also tweeted that a correspondent emailed him to say, 'What is it with St Bedes' boys and airport security?'