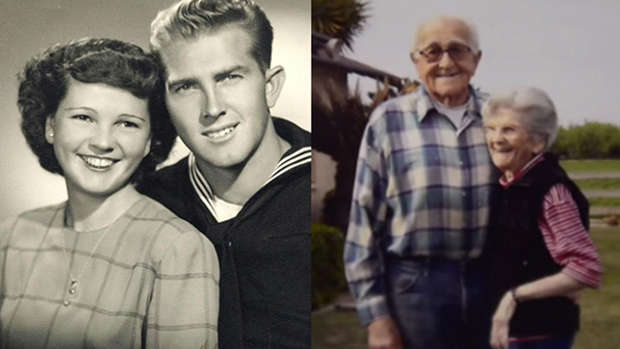 Floyd and Violet Hartwig were married for 67 happy years before dying side by side in their home, at the ages of 90 and 89, on February 11. In many ways, their life was like a series of scenes straight out of “The Notebook” — minus a breakup and all those unread letters. Like Noah and Allie, Floyd sent Violet hundreds of love letters — but unlike in the movie, Violet read hers right away.

The couple met as children and started dating during World War II, when Floyd was home on leave from the U.S. Navy. When Floyd went back overseas, he flooded her mailbox with letters, and they married in 1947. When Floyd’s military service ended, they moved to a farm in Easton, California, where they raised three children and went on to have four grandchildren and ten great-grandchildren. They tended to their land side by side, doing all their own work on the farm up until the last week of their lives. The Hartwig’s daughter Donna Scharton described their romance to ABC News:

“They weren’t fancy. They were just decent people that were always committed to each other, no matter the situation…My dad was in the Navy for six years. He worked for the J.B. Hill Company delivering eggs and then for a feed company. Mom stayed home, helped take care of the ranch, and cooked all the meals. She made breakfast for dad at 4:30 in the morning every day….They never, ever asked for anything. All they ever wanted was their family and it was amazing that they got that in the end…Mom did a lot of sewing – made our clothes and stuff. She joined the PTA at school and she loved doing her crossword puzzles. They were very devoted and when dad came home we’d always have supper together. I remember them kissing each other goodbye every morning. I remember mom called him Blondie because he had such pretty blonde hair and blue eyes…What I want people to get out of this story is my dad’s commitment to serving his country and loving his family. What we felt was keeping them alive was the will to live, and that they didn’t want to let go of each other.”

Violet had been suffering from dementia for years when her health took a downhill turn a few months ago. Floyd, who’d been struggling with his own health, was known for prioritizing his wife’s wellbeing over his own. Early this year, as the family was considering putting Violet in hospice care, they learned that Floyd’s kidneys were failing and he only had a few weeks left to live. The couple was put into hospice together, and soon afterward, they passed away holding hands — a whole lot like Allie and Noah, but with a real love that was far more romantic than any movie. Scharton told The Fresno Bee, “We could tell my dad was in a lot more pain. We said ‘it’s getting close,’ so we pushed the hospital beds together as far as we could. We put their hands together, and my dad died holding my mom’s hand. Mom was not coherent, but we told her that dad had passed away and that he was waiting for her. She died five hours later.” Nicholas Sparks has got nothing on such a bittersweet, beautiful ending to a beautiful life.