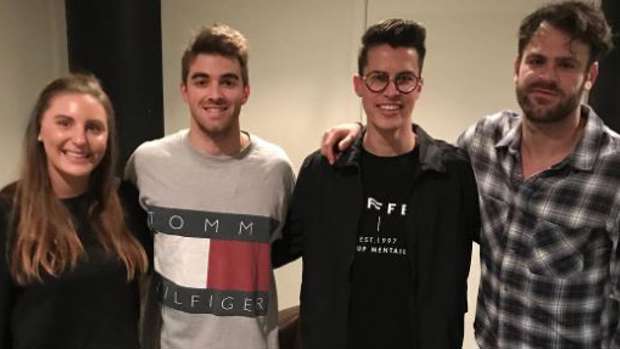 The Chainsmokers were in Auckland last night for one massive show! It's pretty safe to say it went OFF.

Seriously @thechainsmokers are putting on a show tonight 🔥💥

Before the pair went onstage, Cam and Georgia sat down for a yarn with Andrew Taggart and Alex Pall (yeah, those are their real names). They spoke about future collaborations, what they really think of doing a 'shoey' onstage, the weirdest things they've had thrown at them while performing and how a super fan ended up performing their hit 'Roses' onstage with them at one of their overseas shows.

So who are they looking to collaborate with? It's not just 'big names' like you might assume!

How did a fan end up onstage performing with The Chainsmokers? Social media is KEY.

The Chainsmokers were forced to do a 'shoey' on stage in Aussie (that's where you drink out of a shoe) and it turns out, they're not the biggest advocates for the 'bogan' down-under type tradition! Fair play.

And what do The Chainsmokers really want thrown at them on stage? (Hint: It's not ham sandwiches like they've had in the past!)