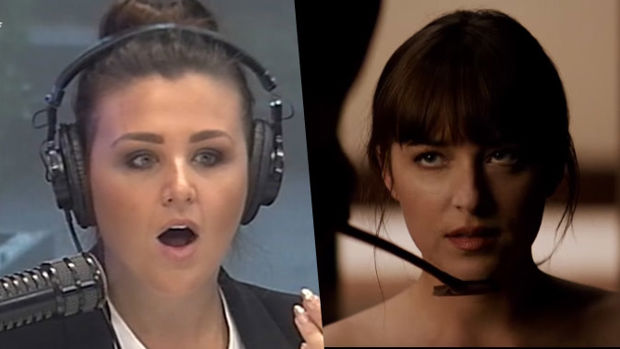 Here's what the three thought of the frisky movie:

Percentage-wise, how much of the film would you say was made up of sex?

C: A good 80% of it. Every time I thought Anastasia would get a break, they were back into it!

Was that percentage too high, spot on or too low?

M: It’s kind of what you expect from these movies, but I did start to feel exhausted and I wasn’t even doing it!

C: It was a bit much, I hardly had time to catch my breath and ask Megan what they were doing with what toys…

A: Ya definitely go into the movie expecting lots of sexy time and expectations were met! Buuut I feel like she must get so tired. It was CONSTANT :') We were tired just watching it hahaha.

Has any of the sex scenes inspired you to try something new in your love life?

M: Hmmm na. Haha not that I’m a prude, but I haven’t like created a room, or brought out a tray of toys to choose from!

Would you take your boyfriend (soz Caitlin) along to watch it?

M: My now husband has been with me to see the other two. We kind of have a giggle together. I would probs rather watch it with him that some of my girlfriends, it feels less awkies! At least you do that kind of stuff with him!

C: If I had a boyfriend (THANKS FOR RUBBING IT IN) maybe? Definitely, 100% would not take my mum.

A: Yep! I took him to see #2 and he didn't mind it - he gets suuuper shy so would probably take him to see him blush for two hours!

Would you watch it with your Mum?

M: Hmmm na. Mum would probably comment and I don’t need to hear that!

C: Oh I just saw this question… again, NO.

A: ABSOLUTELY. NOT. If there's one thing you don't wanna chat to ya Mum about it's red rooms and plugs for your... Yeeeeep.

M: Never enough, also not enough nakedness from him. We saw more of Ana than him!

C: No. Could always be more.

A: Can you ever have enough topless Christian Grey?!

M: The best out of the three, I’d say 4 stars, just manage your expectations, you’re not going for an intricate storyline!

A: Fifty Shades Freed was my favourite of the three, 4 stars!