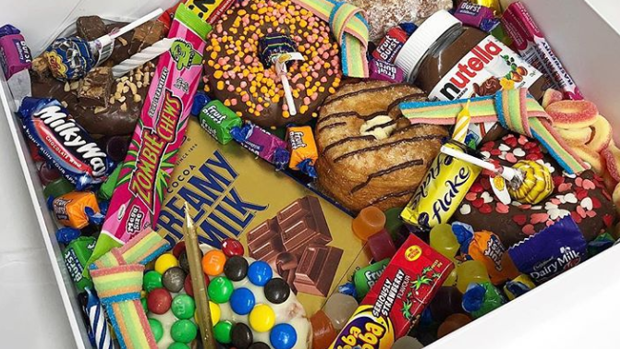 You've probably seen shots of the sweet-filled boxes all over your social media feeds, but Celebration Box's boxes aren't always as sweet as they look.

Complaints have been made to the Commerce Commission about Auckland company Celebration Box after numerous customers said their orders were lost, late, or not as described.

These customers have also been blocked from Celebration Box's social media pages after making complaints.

The company, which started up in July this year, sells boxes of treat that are delivered to customers. Kind of like a flower delivery service, but much yummier.

Celebration Box surged with popularity soon after launch, as many Instagram 'influencers' were seen showing off the boxes on their profiles. But that resulted in them not being able to keep up with demand.

Jade Schutte is one unhappy customer, who spoke to 1NEWS about the negative experience she's received, said that many of her friends had been affected and that after she posted about Celebration Box, others came forward to share similar stories.

"I then realised the extent of how many people had actually been ripped off and blocked and it really upset me ... like, these people paid with their hard-earned money, and most of these boxes were gifts for other people," Ms Schutte said.

"To then be blocked when complaining about their orders not showing up or receiving no refund - it just didn't sit right with me."

Both of Celebration Box's co-owners have responded to the criticism.

Co-owner Iyia Liu took to Instagram, (ironically posting a photo of her sunning it up in Bali) to defend against the backlash.

Most people don’t realise the complexities of a rapidly scaling start up business, in the past 6 weeks we have had to scramble to find staff, we’ve run out of space to operate meaning we had to find a warehouse, we kept running out of supplies of EVERYTHING and we would call around Auckland or NZ trying to find them but often we had bought all the stock they had, meaning we had to substitute, on our busy days we had to shift our entire team to dispatch meaning other parts of the business weren’t able to operate, our entire team being new also meant everyone is still training and learning processes, learning how to do everything, it’s been so easy for so many people to criticise without being able to stand in our shoes or have empathy, the keyword here is INTENTION. We’ve only had the best intentions, we have tried to right every wrong and are still trying to, give our little team who is still learning some time to fix every problem, because we’re all still learning and all trying to do our best ❤️❤️

Co-owner Briar Howard explained the downfall to 1NEWS, saying that they take full responsibility for the bad service some have experienced.

"Father's Day was a big learning experience for us ... we had an unprecedented amount of orders, but we worked extremely hard and quickly hired staff to ensure we could meet the demand.

"In the initial stages of the negative feedback, a couple of comments were deleted from the page as we had spoken directly to the people involved and it had reached spam levels on our pages ... we acknowledge this was done in error, and we no longer delete or hide any comments," Ms Howard told 1NEWS.

"We have remedied the issues of those who have contacted us directly following our standard process ... refunds or replacements are our means of fixing issues and we have taken extra consideration for customers during the Father’s Day period as we acknowledge we made mistakes."